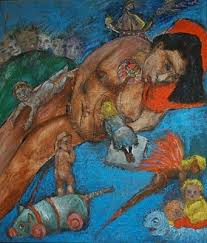 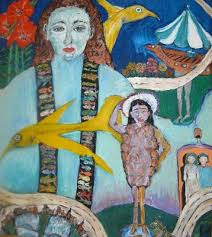 -A Fish out of Water-
oil sticks on stonehenge paper, 4'x5'

I was thinking about motherhood and the effect is had on my body. So I decided to show one painting called Mother Earth. This was painted with oil and oil sticks at a time when my daughter was an enfant. I was a fist-time mother with all the angst that goes along with that time. I had gained about 50 pounds with the help of Haagen-Dazs vanilla ice cream and an OBGYN who encouraged me to enjoy this time and not worry about weight. No wonder my daughter loves all ice cream except vanilla. It just dawned on me.
Well, after I gave birth, it was quite surprising that not all the weight disappeared. That was a shock to me. And, no matter what I did for the first year, nothing would move. I also was so aware of my enormous breasts. They were not small to start with. Well, I had to adjust to my new body and I felt like I was a character out of Jack Chalker's " at the Well of Souls" science fiction adventure. I had morphed into Mother Earth. I was living in a new and different world. In this painting, I painted myself lying on the soft ground in a primitive kind of depiction. Almost like an animal waiting to feed its litter. All the babies are various images of my daughter. As always, I have my guardian angel or in this case a fairy helping me. I also have the past gods on the mountains to the left watching and guiding me. The ship above me is being chased by fish. It is the death ship. The ghost of my life past. The woman kneeling on my stomach is actually drawing a hopscotch game on me since my body wasn’t mine anymore and she could and the imp near my chin was ready to appear and cause more havoc on my new life. Even today when I look at this work I feel the joy of motherhood and the heaviness of that time when my body was no longer mine, but owned by the universe when I joined the Mother Earth club.

-A Fish out of Water-

I added this piece which came a few years after Mother Earth where I was back to my life except traveling a lot to which is the imagery in the bottom left. It is called a Fish out of water because I was not sure about the life I was living. so, just to get to the point of self image, you will see in the close up an image of a woman (me) with a tortous shell coat and inside you see my body back to . This was symbolic that inside us all is that beautiful woman who has always been there but never wanted to shine or show it. That sometimes life takes us to experience many challenges but inside we are all that same person we always were. Next to that image is a couple in a sardine tin. Well, I will not elaborate on that except to say I felt canned in! And, yes the large image is me. A self portrait of myself as the sirene blue goddess crossing the oceans of time and space. The fish within my body are my spirits, my life, and my religion keeping me safe and guiding me through my journeys.