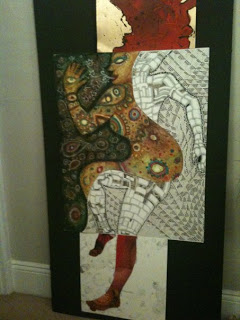 
Our group of artists is called "Absurdas," we are a loosely organized group of artists living around the San Francisco Bay Area. We meet to work on art pieces and to learn new techniques from each other. Sometimes we exhibit together on a particular theme.


Exquisite corpse (also known as exquisite cadaver or rotating corpse) resulted from a method by which a collection of words or images is collectively assembled, the result being known as the exquisite corpse or cadavre exquis in French. In this technique, each collaborator adds to a composition in sequence, either by following a rule (e.g. "The adjective noun adverb verb the adjective noun") or by being allowed to see the end of what the previous person contributed.

http://absurdasart.blogspot.com/
Posted by Ria Vanden Eynde at 10:43 AM