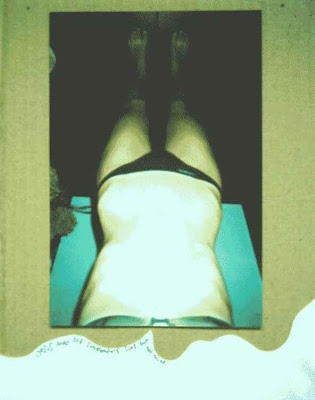 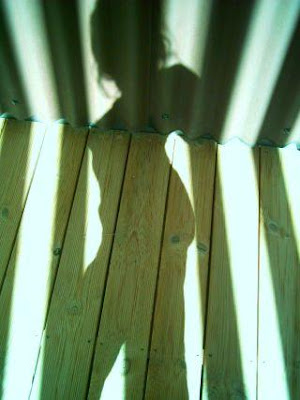 -shadow-
-She vanishes-
A 'mise en scene' of an impossibility, a virtual presence.

L'invisibile è essenziale agli occhi
Si natura negat...
(The essential is invisible to the eyes
It is negative in nature ...)
Sara writes:
The feminine body is never neutral; it is always marked out, claimed, and figured with language, always inscribed in a logic and history defined by men. In this men-written discourse, women are absent as active presence, but present as passive objects of representation. Though history cannot be re-written, it can be re-interpreted. Women may fill in some gaps, some silences, some vanishing points, live in left out parenthesis...

I often play with quotes or idioms, trying to disclose a new sense, implying also nonsense:
-The concept of sexual difference functions as the vanishing point. (~Jacqueline Rose)
-In the video’s text: On est fou que de sens, only meaning drives you mad. (~Michele Montrelay), rien à voir équivaut à n’avoir rien, nothing to see 'equals' having nothing. (~Luce Irigaray)
-The body is written, but can speak also, referring to l'Écriture Féminine where the female body is seen as a direct source of female writing. (~Ann Rosalind Jones)
-nowhere now here (at the beginning of the video) means in this hic et nunc, which is always ineffable.
-Towards the end of the video an inter-text says peek a boo-merang, referring to past and future space-time dimensions in an ironic way. Irony turns everything upside down and so opens up new perspectives, thereby presenting the video’s ending as a kind of hanged-woman game but also staying open ... To give no answers, but multiple possibilities to you, the other, the referent.
-And ‘the end’ is in a big bubble, a vanitas vanitatum; to remind us that life is death, but also that death is life. The death of language could be a new beginning; when wounds become scars, vulnerable but healthy again.
sara's youtube channel

sara on flickr
Posted by Ria Vanden Eynde at 5:12 PM