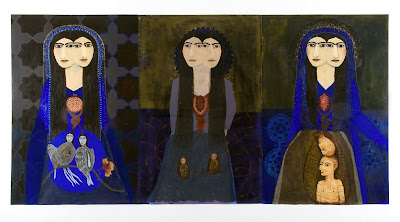 -Matriarchal Trinity-
This painting was shown at the Incheon Women's Biennale in Korea last year.
(click image to view larger)

Samira writes:
In this triptych, the Matriarch is examined as a phenomenon which combines biographical, cultural, psychic, chemical and metaphysical aspects. The Divine/human dilemma.
This mode of representation incorporates the events and narratives of a life into the body of the figure, biography as biology. Their specific identities are woven, embroidered and drawn into the patterns of their dresses. These clues tell who they are: what they feel. A biography as written into the body and onto the dress.
The Ultra Marine blue color that unifies the piece, is a deliberate imitation of the precious Lapis blue of traditional Medieval Icons of the Virgin Mary. The icon was not only the object of worship, but was made with the most precious of materials, giving it alchemical/transcendent qualities. This color also has unique spacial qualities and represents the infinite, the universal, also implying the process of creation itself.
I wanted to subvert the image of the Icon as the archetype of the Western Canon and bring to mind the Byzantine era when Christianity was embedded in middle-eastern culture.
I am especially drawn to Sacred/Religious art from all faiths and denominations, as I found that religious imagery and its language in general, (whether Muslim, Christian, Hindu etc) provides the visual clues and a way into these psychic/spiritual states. The language of Sacred Art seems to be more successful at conveying metaphor and describing the metaphysical aspects of being human. The figure is recognized as an archetype rather than an individual.
I tried to open the field to sacred iconography from all faiths (Muslim, Christian, Jewish, Hindu, Buddhist etc) and fuse the disparate mythologies and traditions, in an attempt towards the creation of an iconography of hybridism.
samiraabbassy.com
Posted by Ria Vanden Eynde at 3:01 PM