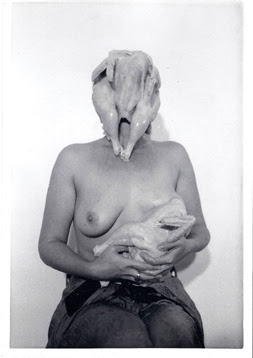 Baby, Chickey!, performance in 1982.
Photo by Chris Shearer.
For the video of this performance and other performances, click here.


From the Exhibition catalog Nina Sobell, at Gallery AREA 53, 2008
Curated by Evelin Stermitz:

In her performance art video Hey! Baby Chickey Nina Sobell appears nude playing with a raw cooking chicken. With a few simple manipulations, she eradicates the cultural distance between mother and woman as sexual being. Playing on the symbolic connection between food and sex, cooking is transformed into sexuality, but the involvement of the dead chicken pushes that sexuality towards bestiality and necrophilia. The scene is further complicated when the same chicken is given the role of baby. Sobell plays with the chicken, rocking it, holding it up by its arms as if teaching it to walk, and swinging it from breast to breast in what can only be described as a milking dance. This collapsing of the baby role with the chicken’s already established roles of dead animal, food material, and sexual object violates other taboos, including infanticide, cannibalism, and pedophilia.
Chris Straayer, Deviant Eyes, Deviant Bodies: Sexual Re-orientations in Film and Video, Columbia University Press, New York, 1996

Nina Sobell
Posted by Ria Vanden Eynde at 10:56 AM