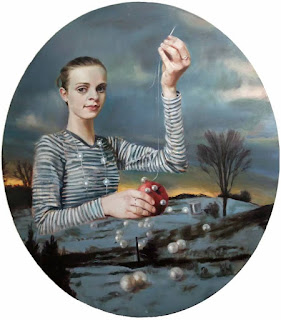 'Red, red heart' from the series 'Silver threads and golden needles (cannot mend this heart of mine)'.

About the series, Chris writes:

For some time I have been intrigued by small 17th century Dutch genre paintings, such as those by Vermeer, Teniers, van Mieris, and Dou, depicting women in the home. I have been mulling over the meanings and stories behind these paintings (by men) of beautiful yet moralising pictures (of women).
This entire series 'Silver threads and golden needles (cannot mend this heart of mine)' this piece is a part of, can be traced back to one small painting that I saw in the Musee Fabre in Montpellier, the Enfileuse de perles (which translates as ‘Female pearl threader’) and is by the 17th century Dutch artist Frans van Mieris. In it we see a young woman in the privacy of her own boudoir, sitting at a table looking towards us whilst threading a string of pearls, with her maid in the background. Each time I see it I am transfixed by the woman with the ambiguous expression on her face, trying to work out what is inside her head.
I started doing some research ... In French the verb enfiler (to thread), which is at the root of enfileuse, has a double meaning, and also refers to the sexual act. The eye of the needle is called a chas in French, which when spoken sounds exactly like chat (cat). This can be extended to chatte (a female cat), which is the French equivalent of the English ‘pussy’. So threading pearls may not be as innocent as it appears.