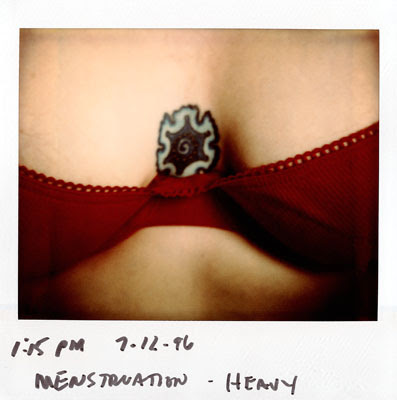 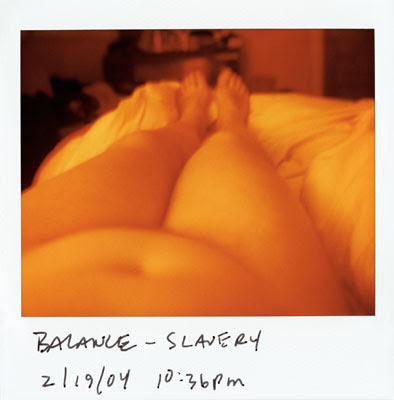 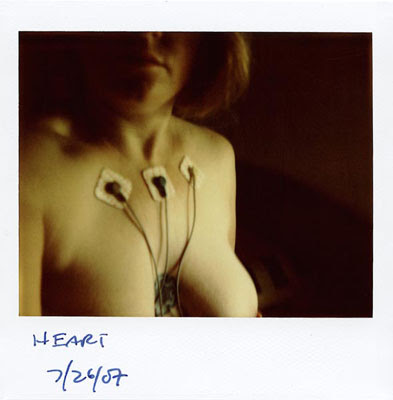 Suzanne writes:
I decided early on in my artistic career that I would address issues of the body and identity in a straight-forward and non-glamorous way. Over the course of 15 years, I made a Polaroid self-portrait everyday, accumulating over 5000 images. To photograph myself, for Journal, In Progress has meant photographing all of my self, every type of moment – heartache and happiness, drunkenness and sex, excitement and boredom, beauty and repugnance – everything. Although I started the project as purely self-portraits, people came into it quite soon, because I discovered that we are more than single selves – we are also described by the people who share our lives. Though I did not set out to go there, I think the project captures the uniqueness of life.
Our bodies are huge – we live and eat and breathe through them. The notion of body and body image suggests and controls everything we do. We often become slaves to the corporeal, its pleasures and its disappointments. My camera captures the distortions that we place upon really looking at ourselves – can we ever truthfully see our selves? It also makes vivid our corporeal natures – we shit and spit, we bruise and tear, and some of us, quite a few, in fact, menstruate. As far as the body goes, my goal has always been to describe a real body – not one measured by the cover of Cosmopolitan – and I found that only my body would suffice – because to be honest, one first needs to be vulnerable.
The project has been realized as an installation of original Polaroids and as Volatile Bodies, selections from the project that emphasize body issues. After its completion the project was made into a movie, 15 years in 15 minutes, an excerpt of which may be seen on my website.
www.suzanneszucs.com