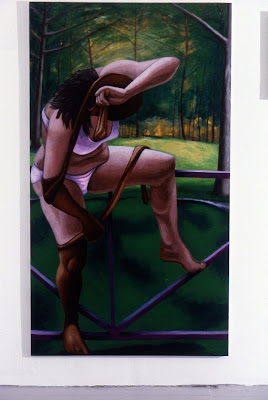 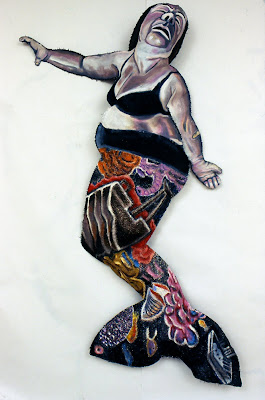 Misfit #4 is from my 1997 "Misfit" series, a series of self-portraits in which I wrestle with pantyhose. This work is about the struggle with body-image and weight, and on a deeper, metaphorical level, about both physical and psychological conflicts and struggles.
Self-Portrait as Midlife Mermaid #4 is from my 2009 series "Midlife Mermaids". In this work, I depict myself through the lens of both fantasy and reality. I show the fact of my aging upper torso and face, and the fantasy of my lower mermaid body.

My most recent and on-going work consists of what I call “stuffed paintings”, which are sewn, stuffed and painted sculptural objects. The idea of a “stuffed painting” subverts the more conventional notion of a “painted sculpture”. The materials I use in these pieces include canvas, cotton fibers, thread, glitter, and acrylic and oil paints. My work attempts to push and blur the boundaries and conventions of sculpture and painting, and of traditionally male dominated “fine art” and female generated “craft”. It also takes a progressive and challenging approach to figuration and narrative in art.

With my “Stuffed Paintings”, I start by creating figural silhouette stencils. I transfer the stencils onto canvas. The pieces are hand-sewn and filled with cotton. The resulting soft sculptures allude to childhood stuffed animals and dolls. They also suggest cartoon figures, spiritual icons, and effigies. These pieces are paradoxical, in that they both invite and repel touch. I make oil paintings on the façades of each piece. The illusionary paintings play off of the sculptural forms. The paintings are based on collages, over which smaller stencils are superimposed, honing in on odd perspectives/juxtapositions. The original compositions are altered and collage/montage-like, inventing new meanings, and non-linear narrative possibilities.

A major theme in my work is an on-going exploration of issues of identity, in particular female identity. I use self-portraiture as a subject through which I can express and conceptualize meaning in a chaotic world. My “stuffed paintings” reveal images that reference physical and psychological states of being and, senses of self, inherent in the human condition. In my work, I am interested in the interweaving of private and public realms. My content is culled from a range of sources: personal and collective history, current events, mythology, urban life, family, and nature. My hybrid personas embody the conflicts, losses and connections between female and male, and childhood and adult, lives.

In my current “Midlife Mermaids” series, I examine issues of female identity, gender, body image, sexuality, and aging. The faces and upper bodies of each mermaid consist of self-portraits expressing a variety of emotional and psychological states, including confrontation and contemplation. Within the shapes of the lower torsos and tails, I paint images of the mysteries, wonders, and wreckage of the sea: coral reefs, sea plants and flowers, which also reference both HIV and cancer cells and female sexual and reproductive organs, and the ruins of sunken ships. Opposites of vulnerability/power, beauty/ugliness, growth/decomposition, and fact/fiction are contained and expressed in these works. My “Midlife Mermaids” are, at once, portraits of a woman artist and individual, and of mythical sirens capable of luring and captivating men. They are simultaneously personal feminine images, and images emanating from a collective female (and male) imagination.
Jane Zweibel
Posted by Ria Vanden Eynde at 4:27 PM